Posted on November 9, 2020 by Sue Puckeridge and Elaine Yeo

Liability as an Occupier of Public Land and Effective Warning Signs

The recent decision of the Court of Appeal in Coffs Harbour City Council v Polglase [2020] NSWCA 265 confirms that the focus for the purposes of establishing liability under the Civil Liability Act 2005 (CL Act)  is on control and management and not occupation or ownership.

The case also discusses what is required for a risk warning under s s5M of the CL Act to be effective.  This section provides that a duty of care is not owed to a person engaging in a recreational activity where the risk of that activity is the subject of a risk warning. The issue was whether a warning sign adequately warned of ‘the general nature of the particular risk’ under s5M(5) of the CL Act. The Court held that the warning sign was not adequate.

The railing consisted of a top rail and middle rail and a kerb and contained large gaps.  A general warning sign stating that the jetty may be hazardous had been erected at the entrance of the jetty.

The jetty had originally been owned by the State government and has been listed as a heritage item on the State Heritage Register since 1988.  It was built in 1892 and restored by the State Government, with the consent of the Council.

Restoration works on the jetty were completed in October 1997 and the jetty was opened to the public. It was handed over to the Council in 2002.  On the same day the State government reserved the land on which the jetty was partly located for “public purposes: Port Facilities and Services” and created a reserve trust in respect of this land under the Crown Lands Act 1989.  It appointed the Trust as the trustee of the reserve trust.  The Council had been appointed in 2000 to manage the affairs of the Trust.

Prior to handover, the Council had been concerned about the possibility of injury arising from jumping or diving from the jetty but it had agreed to accept responsibility for the jetty if it was restored to a safe state by the State government.  Legal arrangements were put in place regarding Council’s legal responsibilities.  Further, the evidence before the Court showed that between October 1997 and the date of the accident there were 4 accidents involving young children falling through the railing.

The Council and the Trust were sued as occupier and the State Government was sued as a former occupier.

The Court of Appeal unanimously dismissed the appeal and held that:

The Court of Appeal relied on earlier decisions in support of its view that the provisions of the now repealed Crown Lands Act 1989, deeming the fee simple to be vested in the Trust did not result in the Trust owning the land for the purposes of the law of negligence.  The land remained Crown land and the jetty was at all times located on land vested in the State.

The Trust as reserve trust had the care, control and management of the reserve and the affairs of the Trust were managed by the Council.  As such, the Council exercised, through its officers, employees and contractors, the care, control and management of the jetty.  Further, the Council was under a duty to maintain, manage and administer the jetty by reasons of the provisions of the Crown Lands Act 1989.

The Council had the power to alter the railing and to install a warning sign.  The Council’s budget allowed for money to be spent each year repairing and maintaining the jetty. While the Trust also had responsibilities, it could only act through the Council.

Although the State owned the land and could arguably have taken some action through the Heritage Council, it did not have the control or management of the jetty at the time of the accident. It was not liable merely because it created the danger by reason of the design and choice of the type of railing.  Nor was it liable as a former occupier in circumstances where the Council’s control and management had been in place for 9 years before the accident.

While acknowledging that absolute safety is not the standard of care required, the facts showed that there was a known and realised risk of young children suffering serious injury because of the gap in the railing and the height of the jetty above the surrounding land.  Consequently, it was no answer to say that the railing complied with the Australian Standards, particularly when the standards change from time to time.  As previously held by the High Court, standards may inform but cannot dictate the standard of reasonable care in a particular case.

The sign at the entrance to the jetty is shown below. 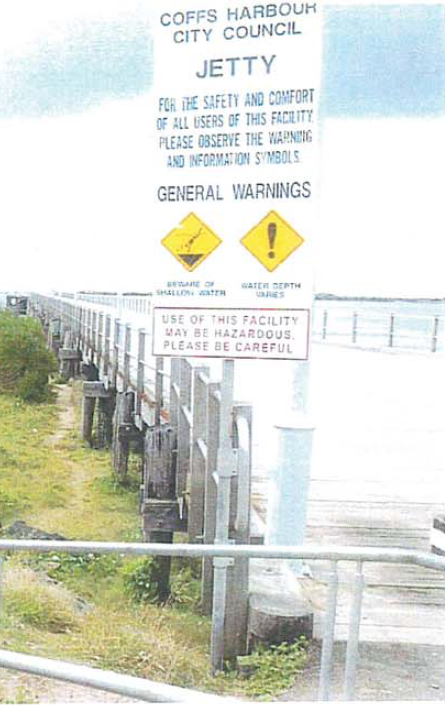 The ‘general warnings’ refer to diving and shallow water, underneath which there are the words ‘USE OF THIS FACILITY MAY BE HAZARDOUS. PLEASE BE CAREFUL.’

The Council argued that the risk of falling off the jetty and landing on the sand was a particular risk which was subject to the general warning at the bottom of the sign.

The Court disagreed and held that read as a whole, the sign was directed to the risk of diving into water of varying depths. The warning did not alert the reader to the risk of falling from the wharf more than four metres onto hard sand.   While it is not ‘necessary for the warning to delineate precisely each separate obstacle or hazard which may be encountered’ it must warn of  the particular risk.

In our view, the warning sign needed to use the words ‘RISK OF FALLING’ and ‘HARD SAND BELOW’ to satisfy s5M(1) of the CL Act. This would have directed the reader to the general nature of the risk of falling onto hard sand, and would have included the particular risk of a young child falling through the railing.

While ownership and occupation may be factors which give rise to liability, the decision makes it clear that the focus is on care, control and management of public land. Government risk managers should assess the risk associated with public assets on this basis.

Furthermore, warning signs for recreational activities should be reviewed to consider whether if, when read as a whole, they warn of the general nature of the particular risks. A sign that a facility may generally be hazardous and to ‘please be careful’, particularly when other risks are specified on the sign, may not be sufficient to enable reliance on section 5M of the CL Act.

The decision can be found here.

LTL welcomes your feedback and comments on our posts. all comments, however, will be moderated and we reserve the right not to publish any comments for any reason.

LTL in focus is primarily designed for public sector and development professionals dealing in the fields of planning, environment and government. you may, therefore, wish to consult your organisation’s social media policy before you post any comments. it should go without saying that we expect all comments to maintain a level of respect and professional courtesy.

In making a comment you are required to provide your email address, this will not be published on the site. if the moderator chooses to publish your comment, the name you provide will be published with your comment – it is your choice whether you provide your full name or just your first name. if you provide your full name, we may seek to verify your identity prior to publication of your first comment. If you wish your comment to be directed only to the author or moderator please make that clear – marking it NFP or Not For Publication is the easiest way. thank you for your support and happy reading – matthew mcnamara, ceo.

Join over 2,000 government, planning and development professionals from across NSW and sign up to be notified each time we post an article

Proposed reforms to the Education SEPP on exhibition

Are all Drainage Reserves Classified as Operational Land?

VIEW ARTICLE
Our Clients
Our Expertise
Our People